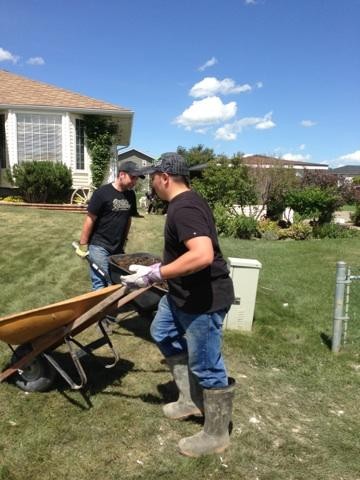 The never-before-seen devastation of the 2013 Alberta flood caught almost everyone in our province off-guard. The tremendous volume of rain, spring run-off and glacier melt threatened the way of life many of us have come to know. Businesses were shut down, roads closed and many families were evacuated from their homes not knowing if they would ever see their belongings again.

It is times like this that we as a province are truly tested. It it times like this that Bartle & Gibson proudly acknowledges the hard work of our staff who get involved to help. We commend those of our employees who take it upon themselves to get their hands dirty and offer support to the victims of such a disaster.

Here are three stories from some of our staff members who helped in the High River area. These are their own words:

“Devastation. Complete and absolute destruction of some people's lives. When asked to write a few words of my experiences over the past 16 days. I have experienced devastation beyond my imagination. Financial ruin of family members and friends. Close family friends live in High River and are approaching their third week of being evacuated. They expect their home to be inhabitable when they are finally allowed back. In the meantime they continue to pay their mortgage and vehicle payment even though the truck they own is also destroyed. Other family members are "temporarily displaced" or more honestly put "homeless" as they await word from their insurance company as everything they owned sits in a home they rented that they still cannot enter.

Two young families’ homes in the epicenter of the worst flood the small town of High River has ever experienced. Those are the most personal of my experiences. My friend of 15 years works for the Calgary Police service as a constable. He tells me unbelievable stories of his 17 hour shifts for 9 straight days of heroism and incredible people doing incredible things. My stories are not as glamorous. Simply trying to help where needed. The evening we heard that people were being evacuated from their homes we opened up ours and offered to take in anyone who needed a place to stay. The day the flood was ravishing the city, I drove a business owner to the police barricade as he anxiously awaited to see if he could see if his small shop was overtaken by the river. On the day the communities began to reopen I volunteered to distribute water and food to people in need. I have shoveled mud from the streets, helped a family look for and find a beloved pet, I listened to homeowners who needed to talk to a stranger about their complete loss. I hugged many people whom I do not know their name. I donated money to the Alberta Red Cross for flood relief efforts. I waded into the streets of Bridgeland and helped pick up debris. I joined a church group that was handing out supplies to clean-up crews, I bought an Alberta Rose donut at Tim Horton’s. The things I have done to try to help those in need are insignificant in comparison to the actions of some true heroes that have emerged from this crisis. I listened to our mayor Nenshi speak at a stampede breakfast recently of those people at the water treatment plant who waded into raging waters with pitch forks to dislodge trees and  debris from causing severe damage to the facility. Or the firemen who went beyond their call of duty. That list is impressive. I simply heard of a need and tried to fill the need. Whoever. Whenever. Whatever. As I write this, Bartle & Gibson has assembled a team together to serve the needs of flood victims in High River tomorrow. The recovery and rebuilding of people's lives is ongoing. In actuality it has really only just begun.”

“When I volunteered in High River I was with a crew of 16 and were able to help 2 families sort through their belongings and clean their basements. As we were first coming into High River I noticed the railroad tracks lifted off the ground and parts of the track sitting on its side. People’s boats were thrown against the trees and completely damaged. When we got to the first home we were helping out at I was completely overwhelmed. There were piles on every lawn of what used to be peoples furniture, shower stalls, toilets and sentimental items. When I went into the basement of the homeowner’s home there was mud everywhere. We pulled out wet and muddy carpets, ripped drywall off the walls and took out all the insulation. We had to shovel heaps of mud of the basement and remove all baseboards, door and window frames and any other items that were in the basement. It took us about 4 hours to complete the job and get the basement as clean as we could. When we got to the 2nd house it was worse than the first one believe it or not, which was very sad. This home still had about a foot of water in it and many sections of the wall was covered in mold. This basement had been flooded just over 5 feet, and we had to do the same for cleaning as we did the first, ripping down drywall and insulation, cutting out carpets and removing all the items from the basement. The hardest part for me in this home was when we got to the homeowners photo albums. There were dozens of baby photos and family photos that were covered in mud and had to be tossed away none of it could be saved. Childhood school projects and trophies had to be thrown out, same with their daughter’s first pair of baby shoes and baby blankets. They were covered in mud and dirty sewage water. I was deeply saddened by seeing all these memories that had to be thrown out in the piles of garbage. However the homeowners were in such good spirits. It amazed me, when we finished they gave us a huge hug and were so grateful for our help, this basement took us about 4 ½ hours and we weren’t even close to being done they were going to need to send in another crew the next day. The one very positive thing about this whole experience was to see thousands of volunteers helping out families. However Thousands of more people are still very much needed.”

“You are not sure what quite to expect when going into an area that has been affected by a natural disaster as High River was just a few short weeks ago.  You read the paper, you see the news but you really do not understand the impact that water can have on a community.  Driving through High River you can see the water lines on the houses going as high as six feet on the houses, completely submerging vehicles.  You see the sewage mixed with mud all over the road, all over the green spaces.  The golf course was covered; you can’t see many of the fairways.  We walked through neighborhoods helping out wherever we could, started with removing a few hot water tanks out of houses and ended with us shoveling rock for an elderly man and his wife.  In between all of this we saw the destruction that the waters had.

Kiam Low, Ben Burleigh, Paul Nicholson, Tyler Vandale and I were able to go out to High River to help the community.   In the morning part of the day there wasn’t much direction for us but to go and help out wherever we were needed.  We went to one house of an elderly couple and took out their hot water tank, did some cleaning of their stairs and just connected with them.  We let them pour out their hearts to us, allowing them to vent, to heal from the pain that they were experiencing.  They showed us pictures of the progress of the flood waters as they were at home.  We were told that it took only 20 minutes for there to be no water to having the water at their front door.  There was no time at all for warning and to grab any valuables and it showed in their emotions.

For the next couple of hours after this job we drove around the neighborhoods asking people if they needed help, plus because we had one of our delivery trucks, we were able to pick up hot water tanks on the side of the road.  By the end of the day we came back with 32 hot water tanks that we picked up.  People were taking pictures of our truck, even one of our customers was following us in the truck taking pictures.

For the afternoon we met up with Victor, a retired trucker who used to deliver to our old location quite often.  Most of his demolition was already finished but we needed to shovel some rock out of the backyard that had been saturated with the sewage from the flood.  All in all this was an experience that I don’t think any of us will ever forget.”

Bartle & Gibson also donated $5000 to the Canadian Red Cross to aid in the Alberta Food Relief. Our partners at the CIPH (Canadian Institute of Plumbing and Heating) matched that, making a total donation of $10,000.

Here is an excerpt from the Red Cross Alberta Flood Relief webpage;

“Heavy rains have brought extensive flooding across Alberta, impacting multiple communities and forcing thousands of people from their homes. Canadian Red Cross teams are actively responding across the province to ensure that immediate needs are being met.  Your help is urgently needed.”

We urge you to check out their web page as well; http://www.redcross.ca/donate/donate-online/donate-to-the-alberta-floods