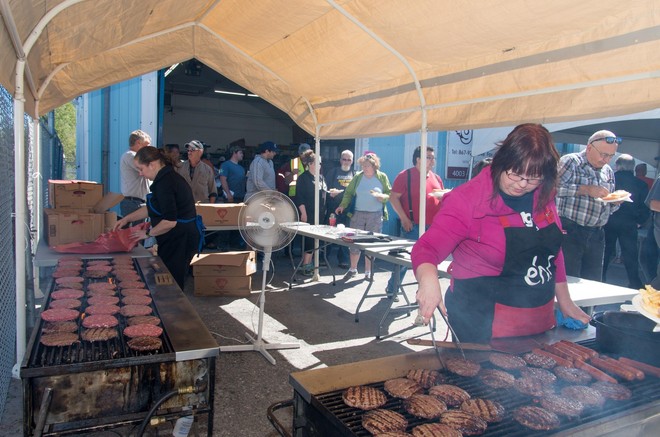 See photos below of our Customer Appreciation Event in Yellowknife, NWT on June 7. The event saw over 200 customers attend with 15 manufacturers who were on site to answer questions and provide training on product(s).

---An Excerpt From The Yellowknifer---

[Bartle & Gibson] raised more than $1,000 and a load full of food for the Yellowknife Food Bank earlier this month – the most staff said they have ever raised for a local organization. Wade Makaro, branch manager of Yellowknife plumbing, heating and electrical distributor Bartle & Gibson, said the company raised the funds as part of its annual customer appreciation event, which included a barbecue celebration and mini trade show on June 7. "We just happened to pick the food bank this year," he said, adding his company has been donating annually to local organizations for about 15 years. "It's a customer appreciation day with (a) trade show. I get multiple guests that come up showing products and stuff that we sell, and then customers get to talk to them about products." According to Makaro, visitors came up for the event from as far as Edmonton, Calgary and Ontario. "There's eight of them that traveled out this year on motorbikes," he said, adding the group raised about $1,000. Bartle & Gibson collected another $191 through a donation pot that was left out at the front of the store, Makaro said. He also estimated the company collected about $400 worth of food donations and gave the local food bank nearly $700 more in extra food from the barbecue. "It's a good feeling," said Makaro of why his company donates to local organizations each year. In the past, he said they've donated to groups that support people with cancer. Last year they donated to the Brain Tumour Walk. He said they've also supported Tim Horton's Camp Day. "It's knowing that if you're a little more fortunate … let's give to the little bit less fortunate," said Makaro. "It's a good feeling when you walk away knowing you did the best you could at that time."