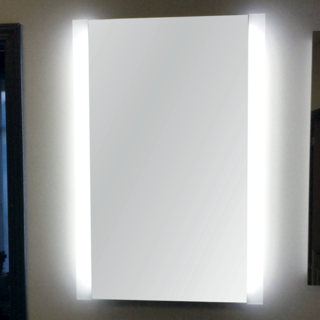 Mirrors have been used since ancient times, traditionally made of highly polished bronze or silver. As such they were a luxury item, obtainable only by the wealthiest people – a French countess allegedly traded an entire wheat farm for a single mirror in the late 1600s.  Until the nineteenth century, most mirrors owned by commoners were made of polished steel.  The silver-lined glass pane mirrors we have in our bathrooms in modern times are a relatively recent development.

Similarly, frequent bathing has only emerged in the last century or two of human history.  It's rumoured that Queen Elizabeth I once claimed she took a bath "once a month, whether I need it or not."  Taken together, these two facts make it understandable that the now-commonplace issue of fogged mirrors after a morning shower were a previously unknown problem—there was a miniscule likelihood that anyone owned a glass mirror and bathed regularly until the last century.

Fortunately, the next age of mirror technology is upon us.  Using active anti-fog technology, Laloo's Halo series offers mirrors that warm up by 10 to 15 degrees Celsius to prevent any condensation.  Various shapes and sizes are available, with LED backlighting that illuminates an etched border that either completely or partially surrounds the reflective surface.  Now, just like polished steel mirrors and monthly bathing, mirror fog can be a thing of the past!